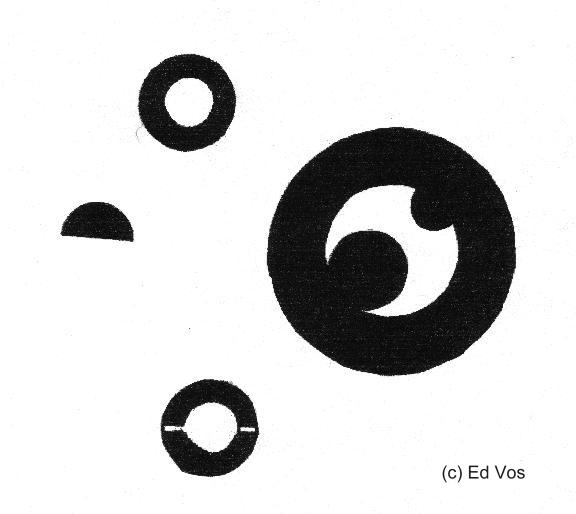 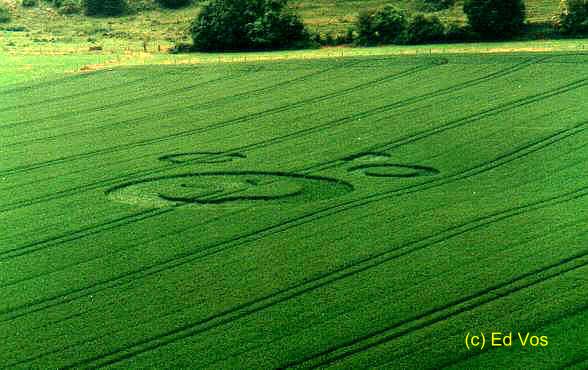 (a report by Ed Vos)

On Saturday 3-6-2000, The DCW (Dutch Cropcircle Webring) received a message from the Belgian cereologist Ludwig de Vocht, who drove on the highway A 76 from Heerlen (NL) To Aachen (B), and discovered the cropcircle formation. I thank Ludwig for his message

This field has been host for cropcircles in 1993 (Planets pictogram) and in the Dutch cropcircle top year 1996.

In the phonecall I had with the landowner, it seemed he didn’t had knowledge of the fact there was a cropformation in his field.

Going into the formation, offcourse using the tramlines, it came out the tramlines were not used before. No footsteps were found, so we came into a "clear" formation. 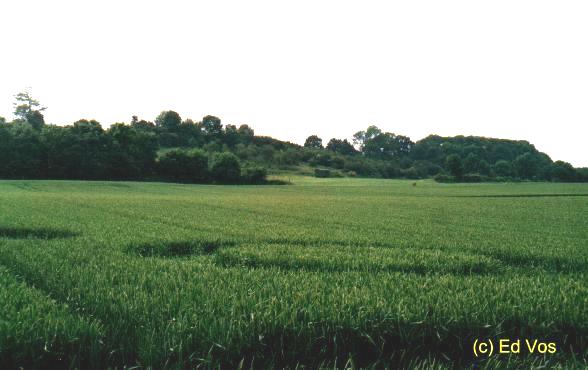 The stems of the young vegetation were not broken, but bent. The weather was perfect for growing vegetary, so the laying crop was growing in vertical direction again.

Measurements in the formation didn’t show any significant deviations of the compass used, within, and outside the formation.

Remarkable is that my GSM phone didn’t work inside the formation, although it received enough signal. 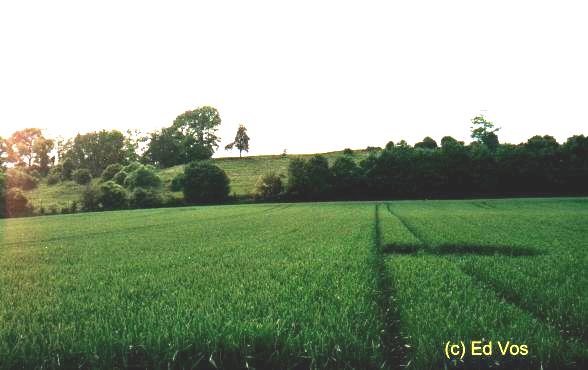 Real interesting information was received by me, from Karin and Peter, who I met in the formation. They told me the field was part of a large construction of lines of fractures.

The formation appeared in the field which is known as the " Benzenraderbreuk", being part of the "Rijdalslenk", to which also other lines of fractures belong, such as the "Feldbies" and the "peellandbreuk".

This line of fracture did arise 35 million years ago, during the Oligoceen. On the top of the hills chalk is to be found. In the lower parts Carbon is closer to the surface, and chalk is deeper to be found. 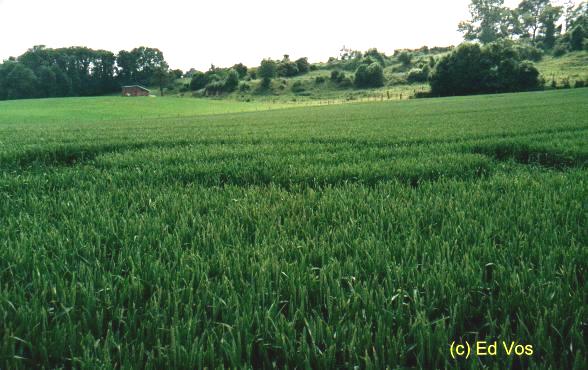 Some people thought the formation had changed. In the centre part of the largest circle, the standing stems should be flattened afterwards, creating two holes. The landowner told so.
A reconstructions tell's us he was wrong. In a phone call I had with him, het told, the formation should be changed in the night from 5 to 6 June. Other persons suggested other date's. Ofcouse I did check it all.

31-05-2000 The farmer inspects the field, and no cropcircle was found.
01-06-2000 The formation is seen in the field.
01-06-2000 As we checked out today, an eye witnes tell's us, the biggest circle in the formation had standing crop, with a structure. (The two holes in it)
03-06-2000 Ludwig de Vocht from Belgium reports the formation at the Dutch Cropcircle Webring. After this report, I had a phone call with the farmer. He didn't even know there was a cropcircle, he heard about it from me. Later that day, I called him again, and he told me, there really was a formation.
04-06-2000 I went to the formation, made a drawing and a lot of pictures.
06-06-2000 According to the farmer, the formation should have changed during the night of 5-6 to 6-6 2000
08-06-2000 Frank Laumen, from Germany, visits the cropcircle and takes some pictures. His pictures shows the same figure as mine. It is the same formation as the eyewinees saw at 1-6-2000.

These facts make clear, the formation didn't change at all.

I suppose the farmer overlooked the two holes in the centre part of the largest circle, the first time he saw the formation.

A few days after my visit of the formation, I became in contact with the 15 years old Dutch boy : Hans ter Horst. Who told me he had a special lichtorb on a picture, wich was taken in this formation.
Because I also research this phenomenon, (see on this site) I asked him to send it to me. Because of my proffession as a photographer, I examened the picture, and concluded, there is no normal photographical expanation for it. It really is a very interesting picture of the phenomenon, as it often apears on pictures, taken in cropcircles, or other powerplaces.
Thanks Hans ter Horst, for sending me the picture. 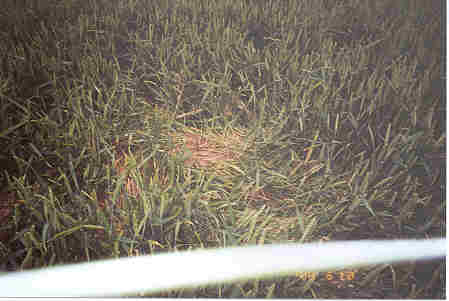 From Mr. J Hochs I received a picture, wich is showed below. It shows a light orb coming out of the centre of the biggest circle. Because I am a proffesional photographer during the last 30 years, I can state this is not explanable in a photographical way, so it is a very nice picture of the light phenomenon, often seen at cropcircles.

I thank Mr. Hochs very much, for sending the picture. 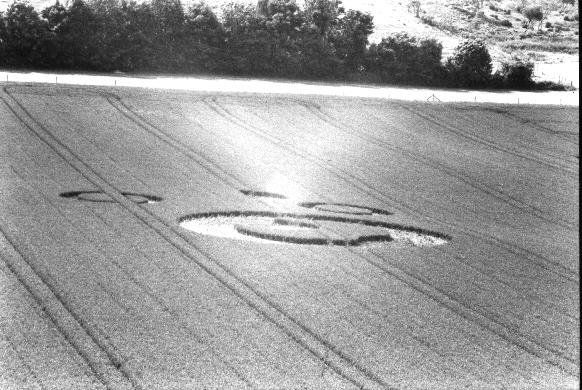