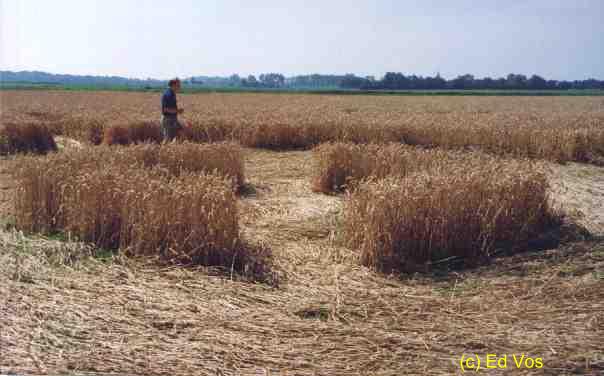 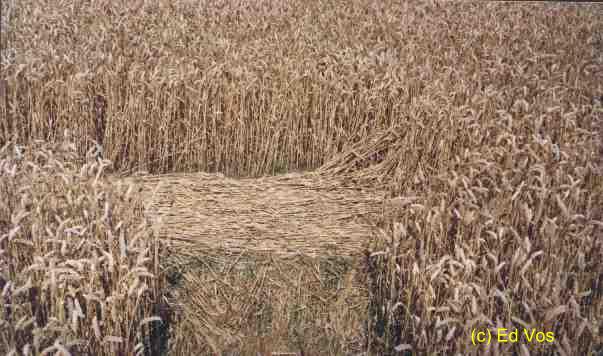 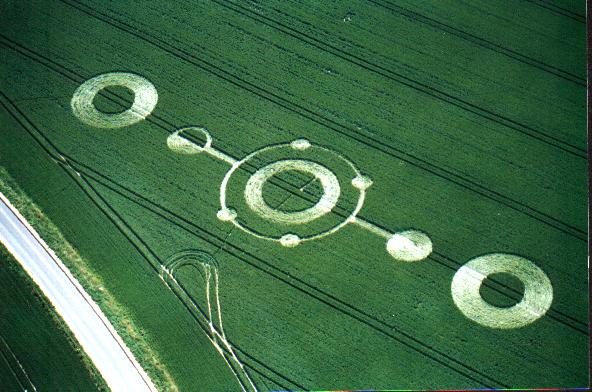 This cropcircle was discovered on June 23rd 1999, and had a total lenght of 129 metres. I visited the formation several times, the first time on July 12th 1999.
For a clear explanation of the drawing, I used numbers and characters in it.
The numbers are for the circles in the pictogram, the characters for the "satelites" on the central circle, number 3. The formation was exactly posisioned on a tramline, that went throug the pictogram, from the upside to down the figure. The path's for instance, were really following those tramlines.

Diameter from top to bottom: 9.7 m., and from left to right: 10 m.. Here also the crop was laid down clockwise. The path that connected this second circle with the third, had a length of 10.1m. and a width of 2.5 m., and was laid down, in the direction from cicle 3, towards circle 2.

The centre of this circle, was split by a path, that went from the left to the right. Above the path, wich had a width of 0.6 metres, there was 5.5 m. standing crop, and 7.3 beneath it. Remarkable is, that the crop, there where the path crossed the tramlines, was standing up. Actually, the path existed of two parts, separated from eachother by those tramlines. The circle around this central-circle, had anti-clockwise laying crop, with a width of 4 m.. The circle around that one had standing crop, with a width of 4.4 m.
The outer small circle, in wich the four "satelites" were posisioned, had a width of 1.2 m. at the top, and 1.0 m. at the bottom. 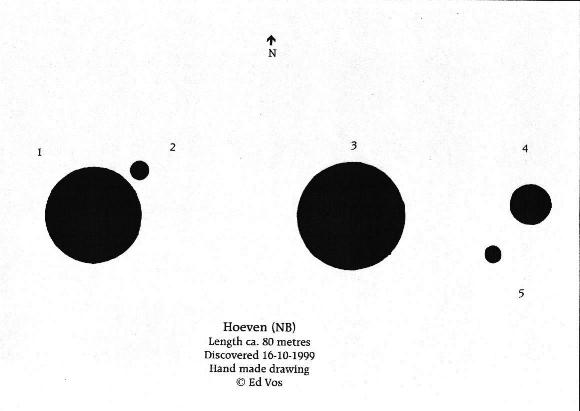 On October 20th 1999, I visited the on 16-10-1999 discovered formation. The village Hoeven, is a well known location for Cropcircle researchers. A lot of times the village reported the first formation of that year regularly. Also the first discovered formation in Holland of 1999 was discovered there. There had also been the first and until now, circle in snow. Mostly the formations are called “cropcircles”, but in Hoeven they appear in several types of vegetation, this formation was situated in rape-seed. It was often reported by eye witnesses that in the evening at that very spot flashes of lights , light balls and UFO’s were seen, and the morning after a formation had been discovered. The same thing happened in this particular formation.

Earlier this year there had been another formation in the at that time very young vegetation. After reports of lightballs and flashes, during the night , a formation was found in the same field on 7-6-99. A day before it wasn’t there. It was in the same field, on almost the same place. This earlier formation wasn’t anymore to be seen when we visited the second formation in October. Rape seed grows fast, and after a few days the stems grow up high again. This earlier formation consisted of 2 circles one clockwise flattened, 10 metres across, and one anti clockwise, 4 metres across. After a few days another circle was to be found at a distance of ca. 30 metres, anticlockwise. Also before discovering this third circle, light phenomena’s had been reported.

Technical information about the formation (visited 20-10-99)

The sizes of the circles were measured exactly. The distances between the tree larger circles were judged, and therefore approximately. The rape seed stems were bent anticlockwise in all of the 5 circles. The circles 3, 4 and 5 exceeded during the night from 6 to 7 October 1999. In the evening of the 6th, lightflashes and balls of light were reported. The circles 1 and 2 were added to the formation during the night of 15 to 16 October. The evening before (6-10) a very large UFO was reported. The vegetation in the 3 older circles was standing up, and had grown. The stems were anticlockwise bent, as told, and a bit further (about 20 cm) the stems grew uphigh again. The vegetation was about 20 cm shorter as the surrounding vegetation. The circles 2 and 3 were laying on a line, exactly east-west.

14 metres across.
The distance was exactly 1.10 meter to: