The Atlantic ring and other ornaments,

from the disappeared continent.

Since a lot of centuries, people decorate there body with all kind of things. With skinpainting, by means of clothing, head-dresses , and other things, like ornaments, which tradition is still in use in our days. In most ancient known civilisations, such as the one of Egypt, certain metals, symbols and gem’s were very popular, and not only to make you look better. Mostly magical, and mystical value’s were adjudged to them, and by means of those ornaments , one was connected with other planets, dimensions or Gods. It isn’t that strange, I came in contact with those rings, and other ornaments, from this legendary continent, called Atlantis.

Already in my childhood, I was very interested in ancient civilisations. At school, history wasn’t my favourite, it didn’t have my very interest. Those stories about great discoverers did have my attention, but that was all.

Atlantis, that was quite a thing, it touched me extremely, but nothing about that was teached ad school ! I read every book or article I could get, and the lost continent became more and more in my interest. In many ways, it should become a red wire through whole my life.

I didn’t visit "paranormal" manifestations for a longer time, because it didn’t fit into my personal schedule. A large one should be held, and I took care to be free at that moment.

That very moment however, I didn’t like to go, but went to the manifestation, because I made arrangements to be free for that day. I went to a hall where a hypnosis session took place. I visited those sessions earlier, so it didn’t bring me new stuff, and I was wondering why I went to the manifestation at all ! I was boring me tremendously, so I left the hall. Outside there were a lot of paranormal and esoteric stands. A strange power forced me to go to that particular stand, where you could find the Atlantic rings and ornaments.

I directly was under impression of the energy of those ornaments, especially the rings, and what they did to me. I was fascinated by the ring, and its wonderful symbol. I felt in love immediately. From the keeper of that stand, I heard a lot of history about the ring, and that wonderful things it is surrounded with. I knew for sure, I had to buy such a ring. I ordered a silver one, and because my size wasn’t available, it was delivered later. When I got it, I ofcourse did put it on my finger instantly. And after I became aware of the fact the ring did much more as I had dreamed of, I finally ordered a golden one, which was hand made for me personal. The Atlantic ring and I became companions. I wouldn’t miss it for ever. 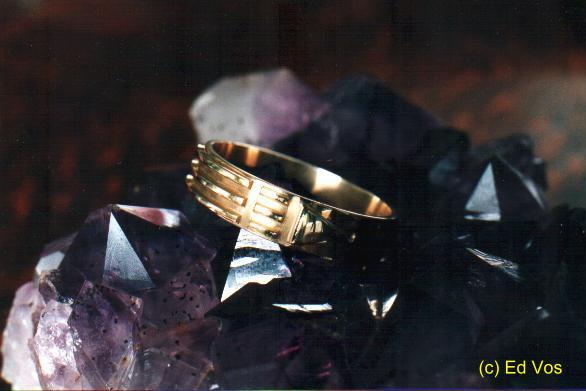 It must have been about the year 1860, an in that time well known Egyptologist, marquis d’Agrain, made his report about his diggings and things he found in the kings valley in Egypt,

and told about this special ring. The ring should be thousands of years old, and showed a geometrical symbol or figure, certainly designed on an esoterical way. It consists of two triangels, with in between nine stripes. Besides the triangle three short stripes, and in the middle three longer stripes. (See picture). At the point of the triangles, there is are holes in the ring, which at the inside of the ring, are connected to each other by means of an engraved stripe.

The ring was made and designed by the Atlantic people, of which the Egyptians are the heirs. By bearing those ornaments, and especially the ring, you get the opportunity to go in to the unexplainable mystery of protection against all kind of negativism. The ring and its symbol are a real Light object. It protects against all kind of disturbance coming from the outside. It is also a barrier against aggressivety, negativism and other things that might disturb the frequency of one person, or might bring him out of balance.

Besides protection from the outside, it also protects against influences that appears because of the conscious or unconscious disturbtion of ones own energies.

As a matter of fact, it regulates ones own field of energy of witch the ring is part of.

Although the ring has very special capacities, it isn’t an amulet or things like that, nor does it get its powers from magnetical, psychical, religious or magical influences.

If you are considering extreme things like suicide, or something like that, the ring shall not do anything about that. It respects ones free choice. It is remarkable, bearers of the ring are less involved in accidents, like car accidents. It also helps with a better health, and helps by recovering of illnesses or other inconveniences of the body. Also a nice result is that some people have very nice metaphysical experiences, they never were aware of.

In the year 1922, Howard Carter did the probably most spectacular discovery of the 20th century, as he opened the grave of Toetanchamon. Lord Carnarvon was exited with the discovery, after all he paid for the job, and Howard Carter worked for him.

Lord Carnarvon however couldn’t enjoy the discovery for long. He died shortly afterwards, by a very mysterious incident. The same happened with others involved by opening the grave.

Only Howard Carter lived for a lot of years. People say, he had an Atlantis ring on his finger, while opening that farao’s grave…….

The ornaments, and especially the ring is very personal, and shouldn’t be lend out to others, because it’s taken part in the personal field of energy of the owner, which is unique for that person.

The base on which the ring was made, can not be changed, and works according to a special pattern of vibrations, which is the invisible power of the ornament, and resonates which the frequency of the bearer. This also is the reason the ring may not be lend out for a longer, or shorter period. It is very well possible, you can’t bear the ring constantly. You softly should be getting used to its energies, and have to learn how to live with it. Before you use the ring, it should be cleaned, making use of a special procedure, which has to be done every 3 months afterwards. It doesn’t make any difference, of which material the ring is made.

As told does the ring have the symbol on the outside, and an engraved line on the inside, and is for that reason a connector between ones inner life and the cosmos. 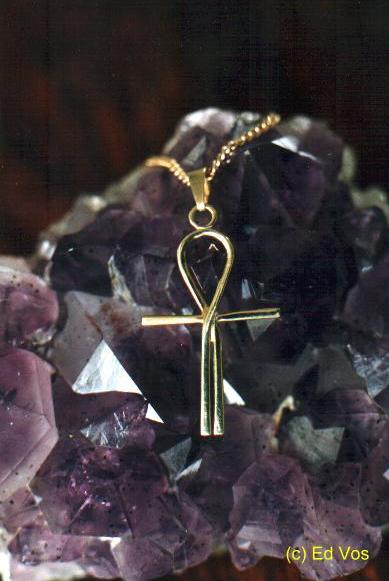 Besides on the ring, the symbol also is to be found on other ornaments, such as plates or bracelets. The energies are the same. There also is the Atlantic Ankh, a model previous to the Egyptian version. The difference is the Atlantic one has two legs. (see picture). The power of it is the same as that of the ring. An extra of the Atlantic Ankh is its antenna function. Holding by hand, the legs pointing to the cosmos, you can ask a question, and held the other way round, you might receive the answer.

I know some Dutch healers that use the Ankh with a lot of success.

The making of the Atlantic ring can be done with gold or other materials, you don’t use anymore, but that might be valuable for you, because of the emotional feeling you have with those rings or other objects. It might make your ring more valuable for you. However, it is possible the ring cannot be made with that material for the simple reason, it wasn’t given to you with the right intention, or has been used by people that hadn’t the right meaning with you.

In that case the ring or other ornaments can't be made. It will simply break during the making of it.

Besides the ring and the Ankh, there also is an Atlantic bracelet. Very often people start with a ring, and later on they buy a bracelet. Ofcourse, that's very nice. However, it might happen the energy of both is too strong, and it might happen you should put of the bracelet for a while.

I know one person who’s bracelet really broke into two parts. It seemed to be too much.

The man involved, keeps those parts beside his bed, to be remembered, "not to want too much at the same time", but to have confidence in the "Higher world".

I am owner of my ring for about 5 years now, and I am very satisfied with it. I feel the rings power, and the protection it gives. It is the same as the Ankh cross, I bear. It might happen, I make use of the ring, as I am helping people on a distance, for instance to put it on a photograph. I also sometimes put it on a stone, I have to give to someone, just to put in its energy. Remarkable is how people react on the ring and its energy. Sometimes I put the ring in someone’s hand, and they feel it’s strong energy. There are different reactions, but everyone talks about that special energy.

After that, I certainly clean the ring with the procedure I mentioned earlier. The ring has an very remarkable energy, and healing powers, in itself. I hope I may bear it for a long time.

With thanks to: Wouter Wylin for several illustrations