We all know the great pyramid of Gizeh in Egypt. That it has very specific energies, as well as copies on scale of it is well known, and there are a lot of books and publications written about it. In this article, you become familiar with a unstill nowadays unknown model, with remarkable patterns and likewise qualities.

That the great pyramid and scale models of it have special qualities is well known. Razor blades keep sharp longer, if you lay them north/south directed under a pyramid on 1'3 of its height.. Wine taste better, if loaded with the pyramid energy. And is the healing work of loaded aluminum foil also a nice application. This scale pyramids of the great one in Gizeh, must be positioned exactly north south. It is not about this pyramids I'm talking about.

As earlier published in the Dutch esoteric magazine "Spiegelbeeld" (Feb 2000 and jan 2001), my partner Lennie, and I receive symbols for a lot of years now, and did we work out one of them, because of a message we got, into a configuration of three pyramids, with a quite strong energy. The pyramids have sides that are all of the same length, so aren't a copy of the great pyramid in Gizeh. Between the three pyramids we have placed a symbol, that strengthened the energy. In stead of the symbol, you can also use a crystal for instance, its energy will be amplified, as we experienced. We regularly use this triple pyramids for help (healing) on a distance. We for instance put a photo of a person under the pyramids, and with significant results. How the triple pyramids work, we investigated by feeling, using a pendulum and dowsing rods. 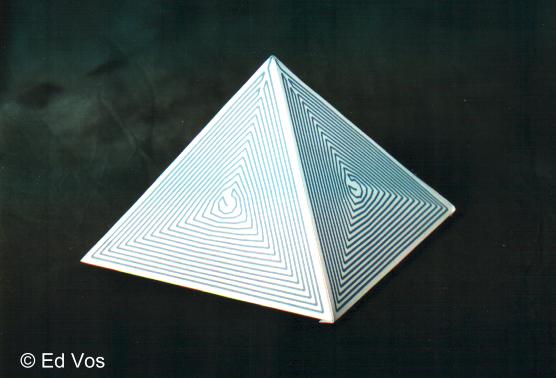 Some time ago, I received a file on my computer from Kees de Jonge, a good friend of ours, with the odd name "Pyravouw" (Vouw is Dutch for fold). It seemed to be a printable cut-out of a pyramid with a strange pattern on it, looking like some kind of a spiral, on each of its sides. after printing the file, and having used the scissors and some glue, we had a very incredible pyramid standing before us. Questioning Kees, he told us he received the structures on a "psychic" way. At the same time, Lennie  (my partner) and I, got through the message, independent from each other, there should be placed an antenna on the pyramid, and after we putted a pin on the top, the energy indeed was increased. We both had the same result with the pendulum. The pendulum could not be hold above the antenna, and circled around is as if it was pushed away, like two the same poles of magnets push each other away. This was very strengthful. Afterwards I wanted to feel the energy with my bare hands, and kept my hand about 2 meters above the pyramid, as Lennie talked to me and I was out of my concentration. Nevertheless, I did feel a heavy wind, beyond my hand, I didn't expected that! In the first place I wasn't tuned in for the job I wanted to do, and second, if I expected something, it should be more closer to the pyramid.

The Vietnamese Master Dang, who gives courses world wide, works a lot with the three sided pyramid, and a smaller one within the bigger. So it doesn't look like the pyramid I'm telling about now. But, remarkable is, that a good friend of ours, send us a message, Master Dang added something to his pyramid......................an antenna. Although we didn't examine his pyramid yet, it is "coincidental" that more people obviously are experimenting with antenna's on pyramids. For that reason, I mentioned this fact.

Because of our experiences, we thought it would be welcome, if other dowser shoot try out this pyramid. I have a lot of international contacts with dowsers, and I thought, Jan and John Young, living in America, might be the right persons to check out the pyramid, so I send them the files. Jan and John, are doing the dowsing work for a long time, and with very good results. They also use their dowsing capabilities by photographing light orbs. very soon we got their reaction. They putted the cut-out together, and went to work with it. This is what they got:

This design appears to capture the pyramid energy and direct it back into the pyramid. We dowsed it without a needle (antennae?) stuck vertically in the top of the apex. On a scale of 1 to 10, we got a 5. With a needle stuck vertically in the apex I got a 7 1/2 and Jan got an 8. So the needle did increase the force of the energy going into the pyramid. This pyramid also balances polarities. It works well as a recharger/polarity balancer for crystals, gemstones, and plants.

Of course we were very glad with this explanation, that stated our experiences, but there was more. Jan and John are also respectable light orb photographers, and did their job on the pyramid. They putted it on a table, on which a board was placed. With their digital camera they took some shots. As light source a flashlight was used, that was placed high above the pyramid. under the pyramid they putted a crystal, about the same height as the pyramid we send them (about 7 cm). One photo is a very ordinary one, showing the pyramid. but the other one is really remarkable. The pyramid seems partly to be disappeared into another dimension! Knowing Jan and John, I know they didn't manipulate the photo. Besides, as a professional photographer, I could easily recognize such things. The pictures added to this articles are cropped by myself. The original pictures are on my computer, including the surroundings of the table, on which you can see part of the garden, and a bin. 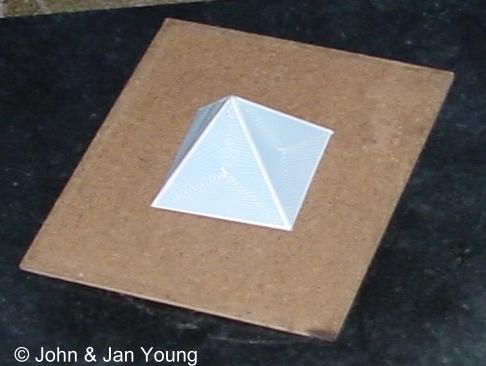 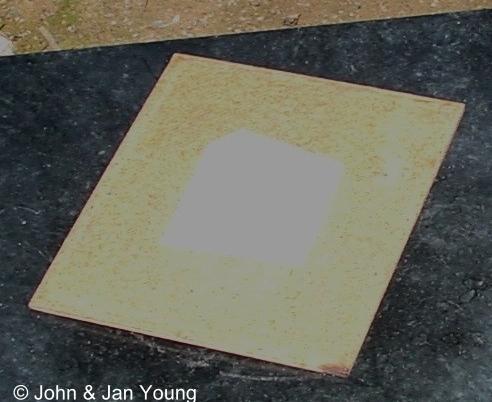 Of course, we do live in a time, in which the changes are coming in a high speed, but I didn't expect this pyramid to travel into another dimension. We still live in a world of miracles, they aren't gone yet, or are they just coming in?

I would like to thank Kees de Jonge for trusting me and sending me he pyramid, and for his permission to send it to Jan and John. I thank Jan and John for their cooperation and their very interesting photographs, and dowsing results

A cut out can be downloaded by clicking on the arrow